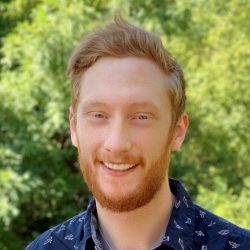 Sam Wentworth is a hard-working, passionate biologist who has been with Sequoia Ecological since March 2019. He holds a bachelor’s degree in Environmental Studies and Economics from the University of California, Santa Cruz. In addition, Sam also volunteered with the Center for Agroecology & Sustainable Food Systems farm and Forest and Ecology Research Plot during his undergraduate career. Sam is a talented budding botanist, hoping to acquire his field botanist and arborist certifications in the new year. Sam fell in love with nature growing up in the Santa Clara Valley and being surrounded by the Santa Cruz Mountains and Henry Coe State Park.

When asked if he had a favorite field memory or story Sam described “when we were dropped off on a remote sandbar by helicopter to perform stream measurements and riparian surveys.” When he is not hard at work, Sam enjoys many hobbies and pastimes such as rock-climbing, soccer, cooking, and hiking with his dog Maple.

Sam’s favorite place in the world to enjoy nature is southeastern Utah because “the landscape is so beautiful and vast.” His most memorable field observation was when he was fortunate enough to spot a Lawrence’s goldfinch during breeding season in northern CA. This observation really sticks out to him because “it’s not a rare species but so uncommon to see in the Bay Area”.

If Sam was not working here at Sequoia, he would likely pursue a career in cooking because he is an avid home chef and loves experimenting with new recipes.

Thank you, Sam, for all your hard work and dedication. We are so lucky to have you!