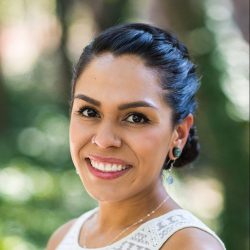 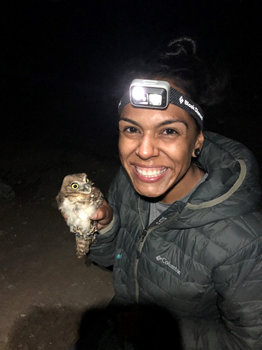 Liz Lopez is a talented biologist who has been with Sequoia Ecological since 2016. She holds a Bachelor’s degree in Marine Science in addition to a Master’s degree in applied Marine and Watershed Sciences with an emphasis in education. She has performed extensive marine and estuarine science research from coast to coast, from Baja to Oregon in the West coast, to Maryland on the East. A knowledgeable and skilled biologist, Liz is currently working towards 10(a)1(a) permits for California red-legged frog (Rana draytonii) and California tiger salamander (Ambystoma californiense). Liz fell in love with the natural world at a young age when she and her father took nature walks and identified plant species together. She also spent much of her childhood exploring nature on her grandparent’s ranch in Northern California.

Although Liz loves many of the species we work with here at Sequoia, her favorite is California red-legged frog, especially the adorable metamorphs. She loves everything about them, from their smell to their slime. When asked what her favorite part about working at Sequoia is, Liz exclaimed “my coworkers! My favorite part is the community. I really feel like Sequoia is a big family, and I truly love everybody I work with, and that is a really special thing!“ On field days, she stays fueled up with her favorite nutritious field snacks: Maple flavored One bars, apples, and oranges. Speaking of fieldwork, when asked if she had a favorite field memory or story Liz described a time when “she got to ride in helicopters to access remote work locations in the Mokelumne Wilderness.” Out of all the magnificent creatures who grace this planet, Liz feels she most identifies with the wolf because she is very loyal to her pack, and her last name is Lopez which means son of wolf.

When she is not hard at work, Liz enjoys many hobbies such as dancing, hiking, kayaking, running, and playing in a son jarocho music collective. She specializes in different types of Latin dances and has even competed on several dance teams. Legend has it, she once challenged a California red-legged frog to a one-on-one dance off and won handily. No coworkers would dare issue such a challenge.

Liz’s favorite place in the world to enjoy nature is the Mokelumne Wilderness because “it is so serene and beautiful! I’ve been back multiple times since working on a Sequoia project there.” Her most memorable field observation was when she uncovered a truly massive California giant salamander (Dicamptodon ensatus) during saw-whet owl banding work in Sonoma.

If Liz was not working as a biologist at Sequoia, she would likely pursue a career as an educator or visual artist. Liz is a wonderful teacher and advocate for issues of social justice, she is passionate about increasing diversity in the sciences and has prior experience mentoring high school and college-aged students.

Thank you, Liz, for all your hard work. We are so happy to have you!