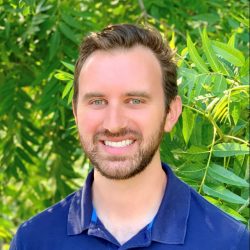 Dan Muratore is a talented biologist who has been with Sequoia Ecological since 2017. He holds a bachelor’s degree in environmental science technology and policy, as well as a master’s degree in applied marine and watershed science from CSU Monterey Bay. During his time at university, Dan also served as a research assistant for CSUMB’s Biogeochemical Laboratory where he collected and processed various water, soil, and gas samples for multiple projects. An incredibly hardworking and passionate biologist, Dan is currently working towards 10(a)1(a) permits for California red-legged frog (Rana draytonii) and California tiger salamander (Ambystoma californiense). Dan fell in love with the natural world as a young cub scout- he participated in boy scouts for around 8 years as a kid and looked forward to the long hikes and camping trips the most.

Although Dan loves many of the species we work with here at Sequoia, his favorite is the western burrowing owl (Athene cunicularia) because “they’re so different from all of the other owl species, and they are so tiny and adorable!.” When asked what his favorite part about working at Sequoia is, Dan stated: “the diverse variety of clients and projects we get to support, it’s so cool bouncing around from project to project doing different kinds of work each day; and of course I love my coworkers!” On long field days, Dan stays fueled up with his favorite field snack: carrots and classic style hummus. Speaking of fieldwork, when asked if Dan has a favorite field memory or story, he described a memorable day when he was leaving a worksite with the crew after a long day of pipeline maintenance. A curious western burrowing owl flew up from an underground culvert and perched next to the caravan of departing cars. After a long day of work, the tree crew finally got an up-close look at the small inquisitive bird which they had been taking measures to protect. Dan recalls that “everyone got really excited about it, it was so sweet to see the crew get so excited about spotting the species we were taking precautions to protect during work.” Out of all the fascinating creatures which grace this planet, Dan feels that he most identifies with the kiwi bird of New Zealand, or as he affectionately refers to them- “flightless nuggets.”

When he is not hard at work, Dan’s hobbies Include walking his dog Zoe around the bay and playing pickup basketball. One of his hidden talents is his ability to craft delicious pizzas from scratch. His go-to recipes include a classic pepperoni and veggie pie, as well as a Hawaiian style. If he were a superhero, Dan would embrace the name “Bird Man” and learn to master the ability of flight.

Dan’s favorite place in the world to enjoy nature is the Grand Canyon. He has been there 6 times, as his family works a rafting company in the area and meets there for family reunions.

If Dan were not working as a biologist at Sequoia, he’d likely be a physical therapist, because “it feels rewarding to help people.”

Thank you, Dan, for all your dedication and hard work. We are so happy to have you!